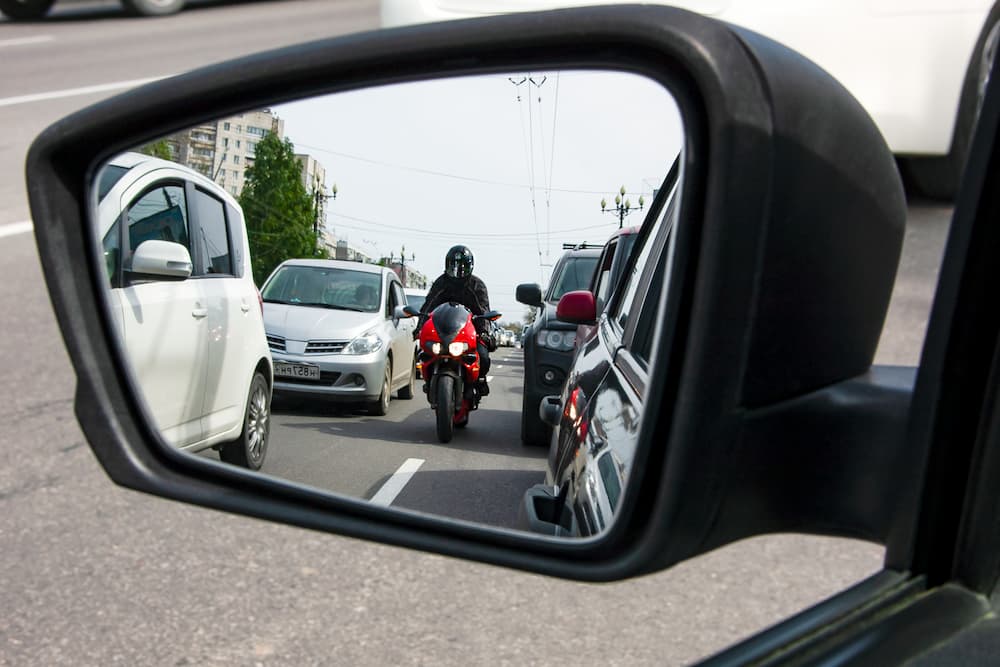 Is Lane Splitting Legal in Colorado?

Unless you’re a seasoned motorcyclist, you may have never heard of “lane splitting” – that is, unless you’ve been unfortunate enough to be involved in an accident related to lane splitting.

The legality of lane splitting varies from state to state, and it is a frequently debated topic among lawmakers. However, it is important to be informed about lane splitting laws where you live, both for your sake and the sake of others.

In this article, we’ll be explaining the concept of lane splitting, addressing key questions such as:

What is Lane Splitting?

Even if you don’t know what the phrase “lane splitting” means, you’ve probably seen it in action. Lane splitting is a maneuver in which a motorcycle driver navigates between two rows of vehicles that are traveling in the same direction. Essentially, the motorcyclist drives down the middle of two traffic lanes, “splitting” the space rather than keeping to a single lane.

Splitting lanes differs from the maneuvering involved in passing or overtaking another vehicle. Generally, it is called lane splitting when it is done for an extended period of time.

Is Lane Splitting Safe or Dangerous?

The answer to this question often depends on who you ask, as there are advocates on both sides of the issue. However, many argue that the risks of lane splitting far outweigh any potential advantages, putting both the motorcycle riders and other drivers in danger.

Some common lane splitting risks include an increased likelihood of:

Granted, it is true that there are ways in which lane splitting can be helpful to motorcyclists, which is why supporters argue that it should be widely legal.

Proponents of lane splitting say that the advantages of the maneuver include:

Regardless of your personal views on lane splitting, you are legally required to abide by the laws in your state.

Is Lane Splitting Legal in Colorado?

However, it is legal for motorcycles to share a lane (“co-ride”) with another motorcycle.

In 2016, a bill was proposed to legalize lane-splitting in Colorado. However, the Colorado House Committee rejected the bill.

What are the Penalties for Lane Splitting in Colorado?

Lane-splitting penalties vary based on the specific situation in Colorado.

If a motorcyclist is caught lane splitting in CO, they could face:

What are My Legal Options After a Lane Splitting Accident?

If you were involved in an accident where a motorcyclist was lane splitting, the rider could be considered liable (financially responsible) for the crash.

A rule known as “negligence per se” states that if a party breaks the law, they can be found negligent with no further proof required. In other words, simply breaking the lane splitting law in CO can be sufficient grounds for a negligence claim filed against a motorcyclist.

What does this mean for you, as the other driver involved in the crash? If the motorcyclist is deemed liable due to illegal lane splitting, they will then be responsible for providing financial compensation for property damage and any injuries that occurred.

Who is Liable in a Motorcycle Lane Splitting Accident?

In a lane splitting accident, the determination of liability nearly always places the burden of responsibility on the motorcycle driver. More specifically, because lane splitting is against the traffic laws in CO, accidents occurring within the state will typically hold the motorcyclist liable.

However, Colorado also utilizes a legal standard called “comparative negligence,” which dictates a process for dealing with scenarios in which multiple parties share fault. Any party that is 50% or less at fault for an accident can claim financial compensation for their injuries. So, even if you do have some liability in an accident, you may still be able to seek compensation. If you are found to be partly liable, your financial compensation will be reduced by the percentage of fault assigned to you.

How to Pursue Compensation After a Colorado Motorcycle Accident

After a motorcycle accident, you may be eligible to seek compensation for damages, including costs associated with vehicle damage and injuries. This compensation is paid by the insurance company that covers the at-fault driver and can be won either through a settlement out of court or a civil trial.

Your first and most important step is to contact one of the Denver accident attorneys at Springer & Steinberg, P.C.

Our legal experts are here to help you navigate the complexities of dealing with insurance companies and other entities after an accident, serving as your advocate and the protector of your rights. You must have a skilled and experienced attorney on your side as soon as possible to shield you from the often-intense pressures of accident investigations, settlement negotiations, and so on.

Depending on your case and your goal, we will work with you to either pursue a fair settlement or fight your case in court. Ultimately, our primary goal is to ensure that you receive your rightful compensation so that you are able to move forward with your life.

Were You Injured in a Colorado Motorcycle Accident? Contact Springer & Steinberg, P.C.