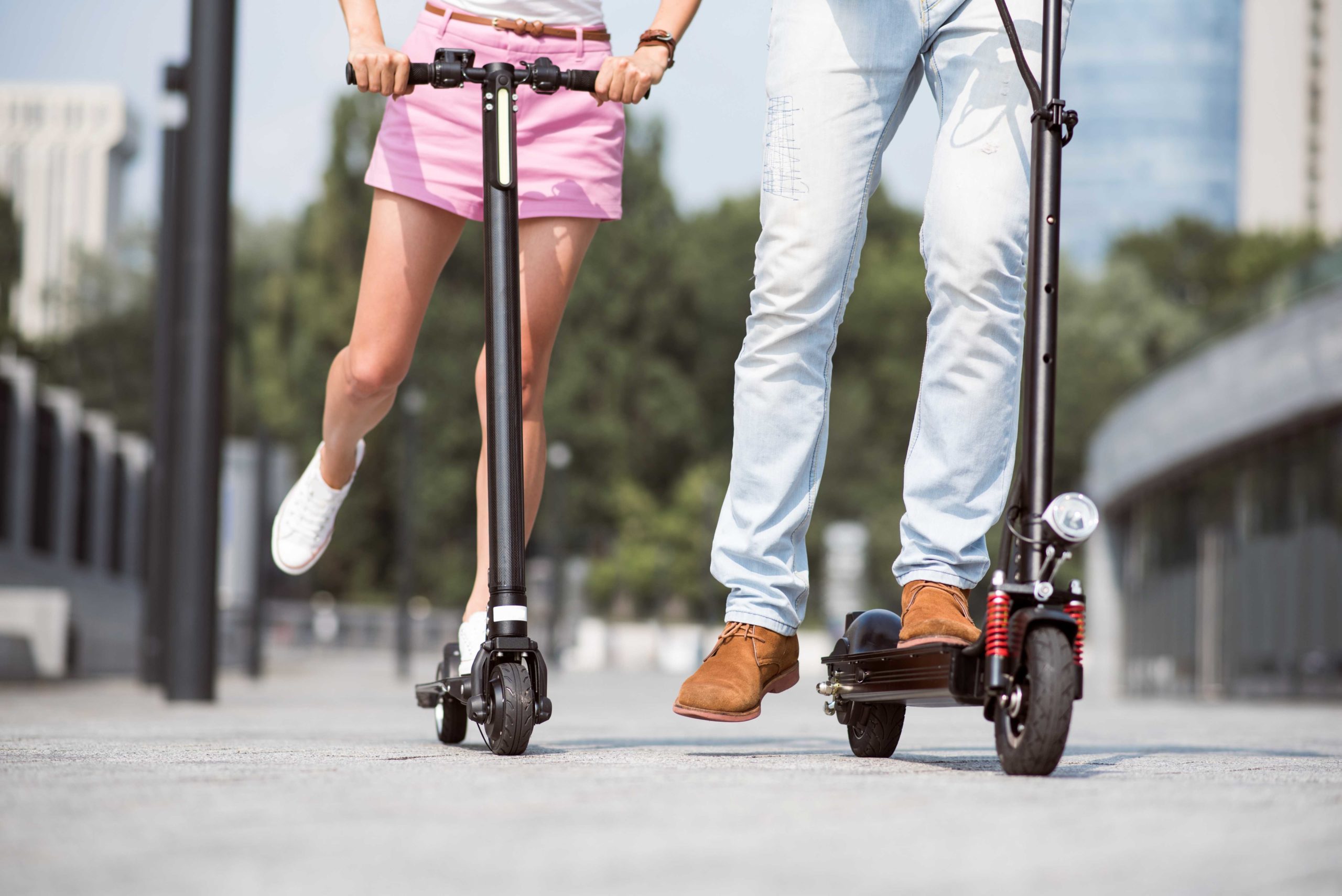 Sharing the Road with Electric Scooters: What You Need to Know

Electric scooters have grown in popularity since descending on city streets in 2018, so much so that many cities across the country have banned them altogether due to their hazardous nature. Learn all about the electric scooter craze that’s taking America by storm, and what you can do if you’re involved in an accident with an electric scooter.

Since their inception, electric scooters have faced a myriad of safety issues. Electric scooters commonly travel in excess of 15 miles per hour, and they have design flaws that make traveling on them at this speed dangerous. When compared to bicycles, electric scooters are inherently unstable. Their short wheel bars, uneven wheels and weight distribution, and insufficient lighting system make them a hazard to drive on the sidewalk, in bike lanes, or on the road. Additionally, electric scooter companies do not provide adequate safety information to riders, including weight restrictions and designations on where to ride (sidewalk, bike lane, or road).

An investigation conducted by Consumer Reports found that there were at least 1,545 electric scooter-related accidents in the U.S. in the past year. Although electric scooter companies like Bird and Lime claim safety is their top priority, the scooters do not carry helmets for riders to use, and Bird came out in support of California’s new law that eliminates the state’s helmet requirement for electric scooter riders older than 18.

A study conducted from September 2017 to August 2018 by the University of California, Los Angeles examined data from two emergency departments and found that 249 people required medical care from electric scooter accidents during this time period. One-third of those patients arrived at the hospital in an ambulance. UCLA found that the most common injuries included falls (47%), collisions with objects (10%), and pedestrians who were hit by an electric scooter or tripped over one (8%).

Since electric scooter companies followed the principle of “beg for forgiveness rather than ask for permission,” the scooters rolled onto city streets without giving state and city legislatures time to enact safety regulations. Many state and city governments are still scrambling to catch up, while some cities, including Beverly Hills and West Hollywood, have banned electric scooters altogether.

Liability in an Electric Scooter Accident

Because electric scooters are such a novel form of transportation, there are little to no regulations regarding the rules of the road for electric scooters. The scooters don’t have turn signals, so if scooter operators are traveling on the road, it can be difficult for drivers or pedestrians to anticipate their next move. Many scooter drivers may find it scary to operate the scooters on busy roads, particularly ones that don’t have bike lanes, so they’ll drive on the sidewalk, even if it’s against the law. Typically, even if a road does have bike lanes, they aren’t on every street that a scooter operator commutes on, which causes electric scooters to contend with the cars they’re sharing the road with.

With all these variable factors and the pure novelty of this method of transportation, it’s likely that there will be a rise in car or pedestrian accidents involving electric scooters. It’s important for drivers and pedestrians to understand who would be liable in an electric scooter accident.

Automobile drivers are required by law to carry insurance. Electric scooter drivers are not held to the same requirement. Some cities, like San Francisco, require electric scooter companies to obtain a permit from the city and provide proof of insurance before they can operate legally. Additionally, the entire state of California is close to passing a bill that would require scooter companies to purchase insurance that would cover scooter riders in the event of an accident. This is not the case in many other cities or states, however, and if an electric scooter driver is found at-fault in an accident, they may be held liable for damages.

Scooter insurance is available, but very few purchase it. When purchased, scooter insurance will often include liability, collision, and medical coverage. But because electric scooters typically have motors smaller than 50 cc, most states do not require scooter operators to carry insurance, and as such, virtually all electric scooter drivers are uninsured in the event of an accident.

Injured in an Electric Scooter Accident? Hire a Qualified Attorney

If you’ve been in an accident involving an electric scooter, our personal injury attorneys can provide qualified representation. Electric scooter laws and regulations are new and constantly changing; you need a legal team that’s well-versed in the law and is equipped to fight for you. Our team at Springer & Steinberg are equipped to handle electric scooter accident cases involving inexperienced riders, negligent maintenance, product liability, and more.

Our firm delivers results-driven counsel to clients across Colorado. We’ve been in practice for nearly 40 years, and we’ve recovered millions of dollars for clients.

If you’ve been injured in an accident involving an electric scooter, contact The Law Firm of Springer & Steinberg, P.C. at (303) 861-2800 for a free consultation today!